Over the centuries, the utilization of the paintbrush has seen not only it's triumph but also it's own demise.  From the original brush strokes of Chinese Calligraphy to the invention of paint and its users such as Leonardo Da Vinci, the brush has undergone many transformations.  It's initial use of direct contact with its source was challenged when Jackson Pollock began flicking his brush literally throwing that paint at his canvas.  Consequently, painting  as we once knew it began to evolve and more importantly, created the eradication of the paintbrush causing the development of innovative substitutions.

In 1985, New Zealand resident Leanne Clarry began developing a hobby that would soon be highly praised and showcased on England's Granada TV.  Leanne initially began by enrolling in an Oil Painting  class, which furthered her knowledge and passion for Tonal paintings - in particular the depth, colour and perspective required.  Unfortunately, that medium proved to be unsuitable for her desire to depict New Zealand Landscape and thus, initiating the foundation of 'wool painting'.

It was Leanne's husband, Len and his occupation as a sheep farmer, which stimulated her initial interest in wool and its properties.  The various shades of un-scoured wools led her to try using them as her paintbrush.

"I began by using a white wool background and then layed coloured wool on top. No glue is used.  Wool is very springy and wants to keep moving, but the texture of the wool binds it together, and it is held in place by glass and frame.  The tonal colours of the wool give an effect like a sepia photograph.  One needs an incredible amount of patience for it all to happen, but I have found it a very rewarding hobby."

Since its creation, Leanne now combines an array of other natural fibres to illustrate her landscapes including mohair and possum fur.  Furthermore, she has expanded her skills by incorporating New Zealand animals such as sheep and kiwi's to greater the paintings authenticity.

After her interview with Granada TV, Leanne became known not just by her community nor her nationality but due to the uniqueness of her hobby, also internationally.  27 years later, she still has a large following with local restaurants showcasing and selling her work as well as invitations to national art fairs.  Most recently, Leanne sold several pictures at Art in the Park (Taupo, NZ), which were sent to Canada, France, America and China.

I (Jodie Meier) got into contact with Leanne to understand her passion further........

JM: Where do you source your wool and if required, how do you treat the wool to preserve it?
LC: I source my wool from Wool Stores and local farms and am also given interesting wools which I spray and store for several years so it really dries out.

JM: I've noticed that you add possum fur to your pictures.  Do you think you might add any other natural fibres in the future?
LC: People often comment that the scenes remind them of the Bark pictures they have seen which has prompted me to sometimes use lichen create a greater effect.  Other fibre like possum fur, a touch of silk, or mohair can add interest also.

JM: Do you photgraph your subject before you take it back to the work room?  How do you choose what your subject is/contains?
LC: I often visualize what I do before I start which actually is a big help.... but I am not working with paint!  The fibre has a mind of its own so a picture can end up completely different which is the fun element of what I do.

JM: What is your own personal favourite as well as most popular detail to make?
LC: Rural sheep and the odd scene are popular, as are ducks, swans and other birds. I try to add water, even waterfalls to my work, which can be very frustrating to do but is what appeals to people the most.   Scenes of the bush with light on the tips of the wool are the base of what I do.  Everyone loves the 3D effect of what I achieve.

JM: Do you only do small paintings? And if so, is this by preference/supply/patience threshold?  Do you find there are restrictions with the size you do?
LC: Restrictions are really centered around the size of the glass needed to place over the wool seam.  I typically only make small paintings due to the complexities and time required for the latter.  Large scenes are more difficult due to the ongoing placement of the glass over the wool until its completion.

JM: Do you work on more than one painting at a time?
LC: I work on one art piece at a time.  I allow one and a half hours per day for my work.  This is due to the high level of intensity involved in the art form.

JM: Have you been commissioned by galleries/art shows/retailers?
LC: I have had many commissions in the past but now avoid them.  I prefer people to make a selection from my scenes as each one is unique.  It is impossible to do two the same.

JM: What are some of your most recent jobs?
LC: Five months ago I was asked to be an artist in residence in central Hawke's Bay for their Arts Festival.  At the recent Hilton Hotel Arts Exhibition, I was the first artist to sell. I was also asked to talk to the Taupo Art Club with 'working with a limited pallet'.  Pictures recently sold have gone to China, Canada, USA, Germany, England and Australia.... and many to the locals and around New Zealand.

JM: Thanks very much for your time and I wish you all the luck and best for the future.

Despite the most overwhelming cliche, Leanne was an absolute inspiration to meet.  Pushing artistic boundaries whilst supporting local produce and agriculture, her unique hobby should be heightened further on an international scale.  One of her exquisite pieces now resides in my hallway and surely after my next visit, I will return with another.  Leanne's hopes for the future are to develop a web page, continuing improving her skills and inspiring others.  She has been informed that recently a lady was clutching a piece of her work as she passed away.  It's stories like these, that further Leanne's passion and truly illustrate the magical talent in her unique hobby.  Picasso, eat your heart out.....

Leanne Clarry and her wool paintings are here to dominate, question and influence the world of  modern art. 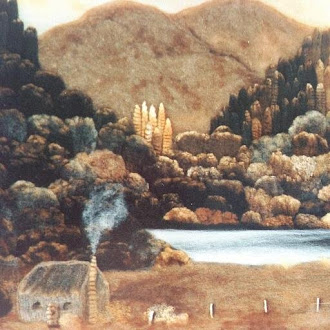 Art / Pictures For Sale ( Scroll Down Within The Frame )